By the end of day 3 of the show, NYS4-HSS Assistant Director John Bowe, Instructor Colleen Kimble and Teen Ambassador Logan Kimble-Lee headed back home safely to New York leaving Director Bill Schwerd and Education Specialist Kenyon Simpson to wrap-up the last day of the 2016 SHOT Show for the NYS4-HSS Program. 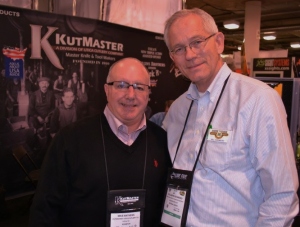 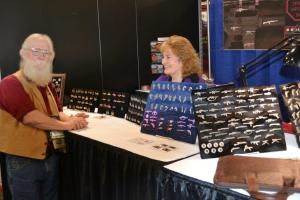 Bill and Kenyon also met with reps from Spypoint of GG Telecom, a company that is working on the STEM (Science, Technology, Engineering and Math) component of NYS4-HSS programming in areas involving computers and cameras.

Other visits made throughout the final day of the SHOT Show covered several safe storage of firearms booths by companies such as Gun Storage Solutions, Snap Safe, Sentry, Browning and Liberty as well as booths featuring firearms safety related gear and equipment including new lux trends in protective headgear for women. It was a very full day!

Thank you to our 2016 NYS4-HSS representatives, Director Bill Schwerd, Assistant Director John Bowe, Education Specialist Kenyon Simpson, State Instructor Colleen Kimble and Teen Ambassador Logan Kimble-Lee for making the trip to Las Vegas and for the many miles you logged on the SHOT Show floors representing the program during the week too.

New York 4-H Shooting Sports wishes to extend our sincere appreciation to the National Shooting Sports Foundation and our many friends, donors and sponsors at the 2016 SHOT Show for their gracious and vital support!

Be sure to follow us here on the NYS4-HSS Blog and on our website at
http://www.nys4-Hshootingsports.org for news, upcoming programs and calendar events including forthcoming information on our biggest fundraiser of the year – the 2016 New York State 4-H Shooting Sports Annual Banquet & Auction – where you just might find some amazing items from this year’s SHOT Show! 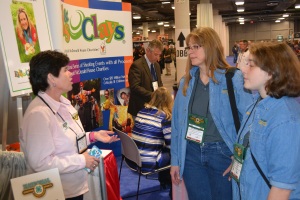 The New York State 4-H Shooting Sports program, represented by Director Bill Schwerd, Assistant Director John Bowe, Education Specialist Kenyon Simpson, State Instructor Colleen Kimble, and Teen Ambassador Logan Kimble-Lee, started their first day of the Shooting, Hunting, and Outdoor Trade Show (or SHOT Show for short), by meeting with Dave Baron, owner of Barron Technology and members of his family and staff. Dave Baron continues to be supporter of 4-H Shooting Sports, both with our New York State program and with National program. He is also involved in National Wild Turkey Foundation work and with the Boy Scouts. Dave’s daughter, Emily, was at the Baron Technology booth and explained to Kenyon and John that she has been looking at a series of colleges that include University of North Carolina – Greensboro, University of Utah, and Rutgers University. Our group, of course, encouraged her to consider Rutgers, a land grant university that is affiliated with Cooperative Extension. Emily also stated that she would soon be getting her pistol permit and showed them several of the intricately engraved pistols that Barron Technology engravers had produced – many of them with gold inlay, custom stocks, and grips. Emily’s favorite, however, was a smaller, less dramatic revolver that had much more subtle engraving with no inlay that was still an exceptional piece of work.

John Anthon, President of Great American Tool Company (GATCO) took time out of his busy schedule to greet and speak with Logan. John has done this each time we bring youth to his booth. He is very interested in encouraging the next generation to not only be responsible members of the shooting and hunting lifestyle, but to also consider working in his industry. After a fairly lengthy discussion of Logan’s bear hunting with a crossbow, John presented all the members of the group with a Timberline Knife and Tool #6520 Simba GHS made with D-2 steel folding blade. What a great friend John has been to our program and example of generous leadership to our youth representatives.

Colleen, Logan, and John also spoke with Jackie Allen, Project Manager for Barnett Crossbows, explaining that with the recent approval of crossbows as a legal hunting implement in New York, they were seeking a set of bows that had appropriate draw weight for various sizes of youth and also featured finger guards along both edges of the rail. When they mentioned that they had been using some Barnett Phantom Jr’s Jackie joked that she might be the only one in the company that remembered those. Jackie is excited to be working with 4-H Shooting Sports and has worked out a non-profit youth purchase plan. NYS4-HSS will be contacting her after the show to about these models which previewed at last year’s show.

Bill met with long-time NYS4-HSS friend and supporter, Wallie Gardner, of Canal Street Cutlery. This collaborative company is now selling a line of knives under the trademark Dexter Knives. Wally showed us a beautiful new knife that has the handle of tactical folder while the blade is a more traditional outdoor blade type. If you are not familiar with Canal Street, they have produced our Limited Edition New York State 4-H Shooting Sports Knife of the Year series, with our logo engraved onto the blades. These knives are usually produced in a limited lot of 25-50. We’re hoping this new knife they showed us today will be the next in that line.

Bill also met with Mike Van Durme and Rod Slings, two of the authors of the new book, Blood on the Leaves:Real Hunting Accident Investigations and Lessons in Hunter Safety. The book is a recounting of various investigations of reported hunting accidents from all over the country and under many different conditions. The forensic evidence used to determine the outcome of the investigation is also discussed. According to Amazon.com it’s “(A) must-read for hunters and anyone fascinated by forensics.” 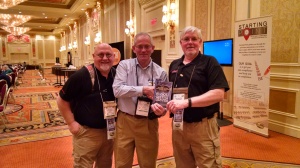 On the return trip to the hotel, while our reps were sitting in the back of the charter shuttle discussing Blood on the Leaves and forensic science in terms of hunter education, came a question from a seat in the front asking if they worked in forensics. The inquiry came from Matthew Kurimsky, a part-time faculty member of Syracuse University’s Forensic and National Security Sciences. Matthew and his wife are natives of Queensbury, NY and the group had a great discussion about forensic science in the investigation of hunting accidents and of shooting cases. Matthew may be willing to do a short session on forensic science at the 2016 STARR program in April. What a small world after all!

Our NYS crew also met with Joe Simmentelli of Adventure Medical, Stephanie Young of Buck Knives, the staff at American Furniture Classics, Ka-Bar, and CamelBak. Other companies and organizations visited included Crosman, where they were showing off the new Benjamin Pioneer Airbow, the National Wild Turkey Federation as well as many others. There will be more information about additional contacts in our forthcoming Day 2 blog article.

Stay tuned our Blog for more from NYS4-HSS at the 2016 SHOT Show!